It has been a great start to 2023, particularly for smaller, growth stocks. The most likely explanation for this is investor expectations regarding inflation and future interest rates. While FED officials keep harping on further rate increases, the bond market is telling us that we are nearing the end of the hikes.

Quite often the bond market is a much better prognosticator than listening to FED officials. I think this is particularly true in the dovish direction; it’s much easier for the FED to err on the side of lower rates than higher. While our central bankers were blatantly keeping rates too low for far too long during the pandemic, i find it unlikely they continue hiking aggressively if/when the economy and the job market show signs of cooling. Political pressure only goes one way regarding rates, right?

The other probable cause of the rally is simply that most market gurus turned quite negative on 2023 over the past few months. Wall Street loves nothing more than analyzing in the rearview mirror; it’s much easier to justify continuation of recent trends than to buck them. However, markets love to go against the masses. When everyone is positioned for lower prices, the table is set for a rally.

Having bottomed as a group last May, the TW universe was primed for outsized gains once the market decided to reverse course. Last year the towel was certainly thrown in on numerous stocks with prices coming down to bargain basement levels. When the market cap suggests investors have given up hope, that’s when a marginal buyer can move the needle.

We are likely seeing new buyers slowly entering into many of our stocks, particularly healthcare names. Biotech was the first group to head lower, starting in 2021, and the extent of the damage was far beyond most investors worst fears. Admittedly, too many companies went public and the index got way ahead of itself. But, the pendulum swung way too far in the negative direction.

Looking back to early 2022, a lot of investors (myself included) said that biotech would be the first group to rally. That rally never occurred as most funds were playing defense in a down market rather than looking for new ideas. Tax loss selling kept the lid on any potential rally as we approached year-end.

Now that they have a fresh slate, funds are starting to look for new ideas. And, if the end of rate increases is just around the corner, it’s a green light for smaller growth stocks. This is reflected by the January performance of TW’s stocks which are up a resounding 14% at mid-month. 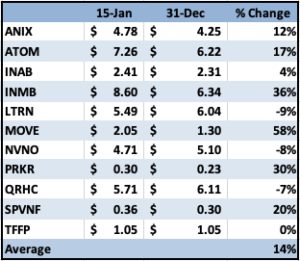 The numbers are great so far, but can they continue? That’s the question. Any value I can add is in being predictive not reflective, so let me try to answer that…by being a little bit reflective in analyzing YTD activity.

I have been saying to my premium subscribers that this is a trader’s market and one needs to have defined catalysts to generate returns in that environment. Looking at the performance shown here, it’s playing out.

The three stocks down on the year have nothing “game-changing” coming any time soon. enVVeno (NVNO) will likely ring the bell on their clinical trial…a year from now. Lantern Pharma (LTRN) is pre-clinical on their most important programs…meaningful results are a ways out. Quest Resource Holdings (QRHC) is an earnings play…that’s a yawner for most when the market is looking to get aggressive.

On the other hand, INmune Bio (INMB) should hopefully get FDA approval for their AD trial soon, ParkerVision (PRKR) has their long-awaited court date in three weeks, and Movano (MOVE) likely comes out with the all-important glucose data here in the first half of 2023. All three stocks are off to rip-roaring starts for the year.

Thus, to answer the question, I believe we can see a further rally in micro-cap growth but I think it’s going to be very much catalyst driven. With valuations low, the risk-reward potential of important events is greatly skewed towards owning the stocks. They are under-owned as a group and, in some cases, even shorted.

For example, I’m not sure who would want to be short INMB heading into this year, but there were 950,000 shares short at year-end. That’s 18 days worth of trading volume. I’d be questioning that position during the weekly portfolio review.

So, enjoy the rally while it lasts. Play stocks with catalysts and keep your eye on the market prognosticators. When they turn positive, that’s when you think about playing it safer. I will also say that, historically, high inflation has taken years to come return to lower levels and the “Goldielocks Scenario” of the FED getting things just right almost never happens. Things look good right now, but I question what the second half of the year is going to bring. I have often stated that I fear we are in the middle of what will turn out to be a “lost decade”. Nothing makes me think otherwise at this time.

Last week Amryt (AMYT) was acquired in an all-cash transaction. Kudos to those who were long the stock. I used to be one of those but, as the biotech market got shellacked last summer, had moved on to more aggressive stocks. Generally they can generate much higher returns when the market reverses direction. However, this time it was certainly not the right move in hindsight. 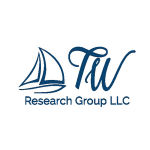